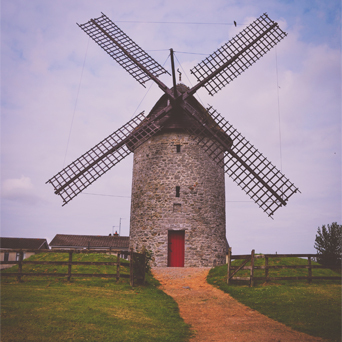 Windmills first appeared in Western Europe towards the close of the 12th century and may have been introduced by returning Crusaders. The earliest known Irish windmill is through to have been built in County Wexford by 1284 and the older of the two Skerries windmills is first mentioned in the mid 16th century. In 1801, Joseph Archer's Statistical Survey of County Dublin listed windmills at Rush, Skerries, Garristown, Donabate, Knock, Stephenstown, Nutstown, and Ballymadun, all in the barony of Balrothery and at Feltrim, Kilsallaghan and Balheary in the barony of Nethercross. Skerries Mills stood out from its neighbors in having...